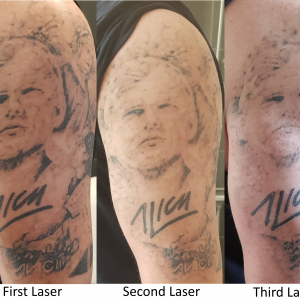 When I first got my tattoo, I actually liked it. There were some details that I did not like but the original artist convinced me that the tattoo does not look exactly how it should and that it would look better after it has healed. A month passed and it still looked the same as the day I got the tattoo. I figured, “I guess you cannot get the exact image because it’s a very difficult profession and it is as good as it can get”.

But I decided to post the image online and I was shocked from the response, being compared to the lousiest tattoos I have seen. So, I panic and get back to the original artist to see if there is anything, I can do about it and she suggests altering it by adding more shadows and darkness to some parts. I’m doubtful as the artist could not pull it off from the beginning. Instead I contact Zoi and book a consultation and get the verdict that it needs to be lasered. How many appointments I had to go through was unsure, but they promised me that they would give me the EXACT image that I wanted.

Knowing the pain I would have to go through, I went ahead with the laser treatments and booked my first appointment. This was my first tattoo and it was to honor a person I have idolized since my late teens so I didn’t want to dishonor his memory and walk around with a really bad looking tattoo that I was extremely embarrassed about.

The pain was no joke. First, they did a quick sweep with the laser that opens up your skin. This part is not as painful and passes quickly. The second part is different as the laser is almost as big as a 10 SEK coin and depending on the intensity of the laser and how much ink you have in your skin, the more painful it gets. I just closed my eyes and focused on my breathing and we divided the entire arm up in different segments.

In total, I think we spent 15 minutes for an entire session and that’s it. The BIG benefit of the laser treatment is that the pain happens just at the very second it hits your skin and then it’s gone. If I were to compare it, it feels like an extremely tight rubber band that snaps your skin and then disappears. But imagine you must go through 10-15 shots in a row. After all of my sessions’, I kinda got used to the pain and during my third session, we finished by dividing up the entire arm in two segments and then we were done.

For me, the aftercare was more hurtful and annoying than the actual laser session. After my first session I bled a lot and already the next day by arm was covered in big waterfilled blisters that was really uncomfortable and it took around 5 days before everything went back to normal. I was not entirely healed but I could do my daily business as usual. However, for each laser session, my skin adapted and after my third session I did not get a single blister. So, for me the first session was definitely the toughest one in both pain and aftercare.

After going through this process, I’m extremely happy I made the right choice, even if it took almost 9 months and cost me a fair deal. If you are in the same position as I was and you’re thinking of skipping the laser treatment, I cannot stress enough of how important that part is in order to give the artist the best chance of getting the best result. The laser treatment is really shitty to go through but it IS worth it. The result I ended up with is just mind blowing and that is all thanks to Zoi Tattoo and Tymur Denysenko (the tattoo artist). I can finally show my arm out in public with great pride!